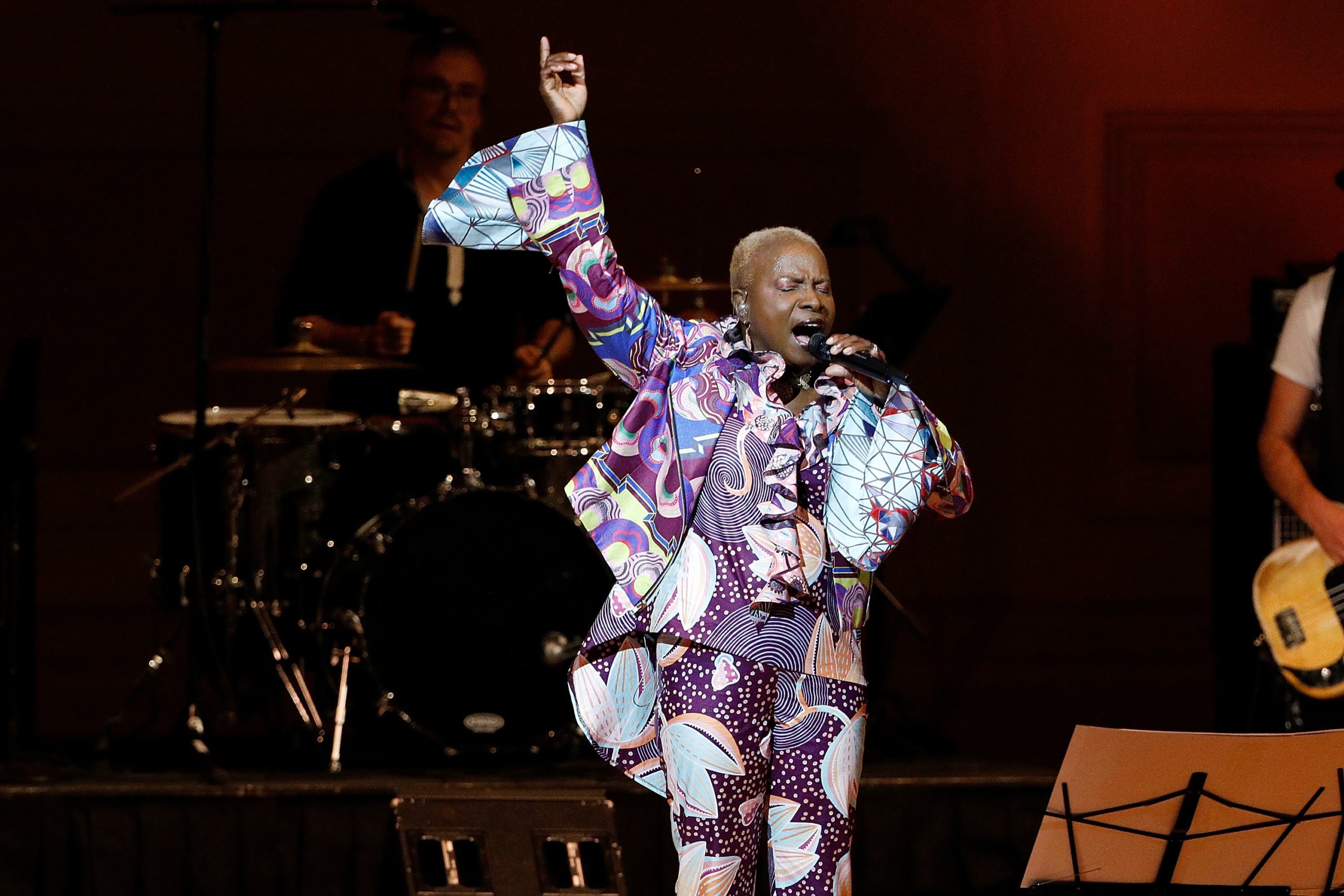 Global pop star and 5-time Grammy winner Angélique Kidjo has partnered with 2015 Grammy producer of the year Jeff Bhasker (Kanye West, The Rolling Stones, Beyonce) for a full circle re-imagining of Talking Heads’ 1980 landmark album Remain in Light. The original album, considered to be one of the greatest albums of that decade, was influenced by music from West Africa, notably Fela Kuti’s Afrobeat. This remarkable new collaboration is a radical statement and positions the Benin-born artist as she’s never been heard before.

In 2017, Kidjo premiered this musical project at New York’s Carnegie Hall and at Bonnaroo (David Byrne came out of the audience to sing with her during the Carnegie Hall show). The shows were met with rave reviews, and she continues to perform the album in concert throughout the world.

Kidjo first crossed paths with the original album when she fled Benin and moved to Paris in 1983. She recognized it as African, but the rhythms were harder for her to place. It stayed with her, but she kept it to herself because some of her music teachers and fellow students at the time dismissed her opinions because she was a young African woman who wouldn’t, in their opinion, know anything about rock and roll. But the album continued to inhabit her subconscious.

Still inspired by the experience of recording the celebratory material for 2014’s Eve, she took other songs and folkloric tales she heard while researching Eve and wove them into the fabric of the Remain in Light songs, which she first recorded as demos in her home studio. Later when recording “Cross-eyed and Painless” with Tony Allen, she effortlessly dropped in lyrics from Fela Kuti’s ‘70s classic “Lady,” reaffirming and strengthening that initial inspiration while extending it into something new, modern and uplifting.

“I started working on Remain in Light and I would pick a song and it would match these Beninese traditional songs I heard,” she recalls. “It was just so organic and normal that the whole thing fell into place. You have all these puzzle pieces — you see the picture appear and then you put the stuff in places.” “It was a challenge reinterpreting this iconic masterpiece,” says Bhasker. “We didn’t simply want to “cover” what the brilliant producer Brian Eno and revolutionary Talking Heads created, but rather put our own spin on it. Rip out its guts and turn it on its head.

As they were inspired to take an African form and rock it, we took rock and brought it back to Africa. I think the result is a beautiful full circle experience that I hope enhances both worlds and brings culture closer together.”

Kidjo had met Bhasker at a benefit concert in London where he was the musical director and she was a guest of honor. The two instantly hit it off and the only sticking point was trying to figure out what they would do together. They later met in Los Angeles where Bhasker told her he just needed a kernel of an idea. A short time later she sent him two Talking Heads demos – many of the vocal tracks were never rerecorded because the demo performances were so strong – and a week later he was onboard for the whole album.

“From the first day of the recording, we picked up right where we left off. It’s one of the most fun filled and enriching projects I’ve ever worked on; it’s the reason I make music,” Bhasker explains.

Remain in Light is made anew. The first clue is the stunning new black light photo of Kidjo by Kerry James Marshall. The African-ness of the sound comes out in same mesmerizing African polyrhythms that made the original so ground-breaking, but there are also different languages echoed in counter melodies of the haunting “The Overload,” the edgy “Listening Wind” and others that are added by Kidjo.

The delivery of David Byrne’s lyrics is a classic study in contrasts while embracing the bigger ideas. Whereas the vocals were originally self-conscious, arty, ironic and sometimes alienated, Kidjo’s voice and additional lyrics are a clarion call that sheds new light on the politics in “Born Under Punches,” the empowerment of women on the “Great Curve” and tackling the African skin bleaching phenomenon on “Seen and Not Seen.”

“When it comes to music, I don’t have much fear,” says Kidjo, who is also well known for her humanitarian efforts. “If you are inspired to do something, then there is truth in that. My music has been a weapon for constructing bridges. We have so much in common, yet we are so divided that we may not take a pause to think about what we may have in common. We think there is things to divide us, but not much divides us.”